The banjo player and flautist in the corner of Barry’s Old School Irish, a cozy pub on Main Street in Webster with forest green walls and tartan-covered bar stools, were in the middle of a lively session in front of a good crowd on a recent windy Saturday afternoon.

Then someone brought up the impending St. Patrick’s Day holiday, and the musicians couldn’t contain their contempt.

Peri Malone on the tin whistle was annoyed by the annual pageantry of her Irish heritage reduced to what she called “shamrocks and beer.” Session leader Sean Rosenberry on banjo echoed that sentiment.

“It’s kind of frustrating to see this rich, nuanced culture reduced to a stereotype,” Rosenberry said.

For them and other enthusiasts of the traditional Irish music scene around Rochester, promoting Irish culture is more than a once-a-year beer-soaked bar hopping. Sessions, as the routine gatherings of musicians are known, are a means of preserving Irish identity.

Their music and all it stands for – wordless communication between a people who endured war, famine, economic ruin and waves of emigration – can be traced back to Celtic communities on the Emerald Isle ages ago. about 2000 years old.

Sessions are the essence of traditional Irish music. They can vary in size and quality, but they tend to have the same design. Musicians, usually anchored by a leader, gather at any tavern that has them, unpack their instruments, and play.

Sometimes a pair of musicians show up. Sometimes five or more. They show up at places like Johnny’s Irish Pub on Culver Road, which holds two sessions on the last Sunday of the month, and Charlotte Tavern on River Road for the ‘Tuesday Tunes’ session.

Gatherings are more of an art form than a concert. Their players are not there to play, but rather to create jigs and reels in the sonic tradition, without the help of sheet music. Perhaps that’s why so many Irish musicians have a keen ear for the melody of the tunes they play, but can’t remember their names.

Shawn Casey, a performing rhythm guitarist, said listening has a lot to do with the magic of a session.

“The best musicians listen, and they never overdo it,” he said. “They put in the right stuff, and sometimes not playing anything is the best thing to do.”

The music usually consists of a single melody played by fiddles, flutes, accordions, concertinas or Uilleann pipes (an Irish bagpipe), often accompanied by the rhythm of an Irish drum known as a bodhrán. Tunes are played in single keys such as A, C, D, or G, and usually consist of 16 to 32 bars.

Ryan, 33, who grew up with three Irish step-dancing siblings, started a weekly session of Irish music at the now-closed Sheridan’s Pub on Mount Hope Avenue after returning from a summer in Ireland in 2010. Soon after, he launched the sessions. at Barry’s. 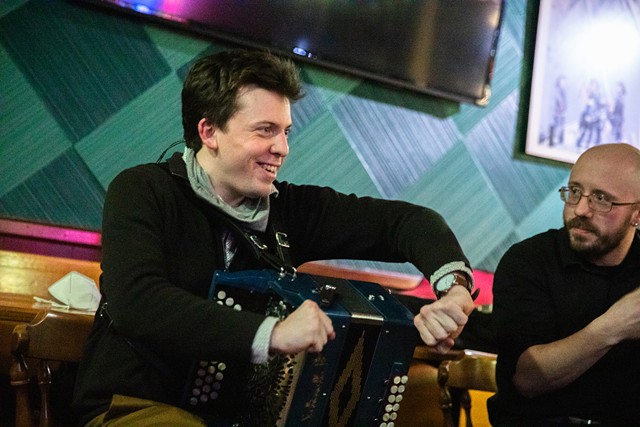 “It’s important to know that your ancestors weren’t the stereotype you see every March,” Ryan said. “They were real people who had their flaws and their good sides, just like anyone else, but they had real traditions and real things that they actually engaged with, it’s not the plastic stuff. and pixies you see once a year. And it’s important to keep those things around because otherwise all you have is the stereotype. (Ryan is the life editor’s partner and CITY Culture, Rebecca Rafferty.)

The origins of Rochester’s “trad” music scene, as it is known, can be traced back to the immigration boom after World War II and the establishment of private clubs by Irish immigrants to promote brotherhood and preserve their heritage.

When the Harps Club was opened on Buffalo Road in 1959 by the Gaelic Athletic Association, it was overseeing a revival of traditional Irish music after decades when the sound had been presented as backwards “bog music” unsuited to the times. modern. This began to change with the founding of the Comhaltas Ceoltóiri Éireann (or “Society of Musicians of Ireland”) in 1951.

It wasn’t until 1973, however, that the Harps Club would begin holding sessions. They were started that year on a monthly basis by button accordionist and concertina player Ted McGraw, who is now widely considered the godfather of Rochester’s traditional Irish music scene.

“I’ve always welcomed everyone, even bad players,” McGraw said.
He and other session musicians formally organized in 1986 when they collectively became the Rochester Irish Musicians’ Association, also known as the Tom Finucane Branch of Comhaltas Ceoltóiri Éireann.

McGraw, now 84, said the quality of the melodies sets traditional Irish music apart.
“When was the last time you heard a modern melody on TV or radio that you could grab a handful and take with you?” he said. “There are very few pieces of music you hear these days that have a melody.”

McGraw played tens of thousands of these tunes on the air during the 43 years he hosted his weekly radio show, “Irish Party House,” on WXXI Public Broadcasting. The show was a Sunday afternoon mainstay for people of Irish descent, whom McGraw greeted weekly with a cheerful Gaelic reception of “Cead mile failte”, meaning “One Hundred Thousand Welcomes”.

When McGraw pulled the show in 2017, fellow Irish musician Dave Halligan remarked to the Democrat and the Chronicle that the show kept people of Irish descent connected.

“Once a week when you listened to this show, you knew people from all different elements of the Irish community were listening at the same time,” Halligan said at the time. “Our hearts and souls were together during that hour.”

Halligan, an accordionist and flute player, said in a recent interview that the sessions serve the same purpose, acting as both a social network and a training ground for practitioners and admirers of an ancient Irish tradition.

“I think it’s the music and the interaction, the camaraderie and the friendship between the musicians,” Halligan said. “It’s the community of musicians who are connected by their hearts and their minds, through this music. They share tunes, and they share stories.”

Daniel J. Kushner is CITY’s art editor. He can be reached at dkusher@rochester-citynews.com.