Made with great style and seriousness, it’s a worthy tribute to the great Chadwick Boseman and an MCU movie with heart and soul.

It’s worth remembering how impactful the first Black Panther movie was four years ago. It’s now the ninth-highest-grossing film of all time (stop and wonder), is the first superhero film to be nominated for Best Picture at the Oscars (ditto) and has transformed its hugely charismatic lead Chadwick Boseman into a megawatt star.

That there was a sequel — if not an entire standalone franchise in the bewildering MCU — was a given, even without Boseman’s tragic death from cancer at the age of 42 in 2020. His memory looms large in this bracing. if a sequel too long and not just in a fictional sense.

Can his former co-stars and director Ryan Coogler shape a compelling story around his memory while also getting things done for the future Black Panther continuum?

Black Panther: Wakanda Forever succeeds most of the time.

We’re back in the futuristic hermit kingdom of Wakanda, a place that always reminded me family guyvision of Ireland before the Irish invented whisky. Here we have a proud, prosperous and incredibly scientifically advanced African nation, left alone to thrive away from the rapacious European settlers who sullied the rest of the continent for hundreds of years.

Boseman’s sad absence as T’Challa is explained in the opening moments as his sister Shuri (Letitia Wright) races to find a cure for her sick brother as his life declines only to be gravely informed by their mother Ramonda ( Angela Bassett) which he passed.

It ushers in the funereal atmosphere that pervades the rest of the movie, and it’s a very talkative Marvel movie with lots of philosophical musings interspersed with those action sequences. Naturally, the greedy nations of the west (“the colonizers”, as the fierce warrior Aneka regularly mocks) are aware of the possibilities of T’Challa’s passing and are beginning to plot new ways to harvest Wakanda’s precious resource – the vibranium mineral.

It involves War Dog Nakia (Lupita Nyong’o), who is now in self-imposed exile in Haiti, and CIA agent Everett Ross (Martin Freeman), who has become Wakanda’s reluctant go-between with the pernicious west. . 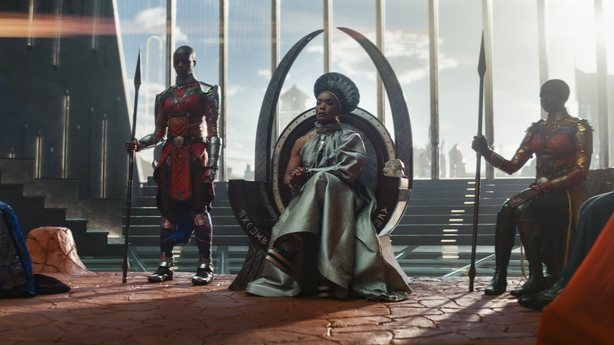 However, there’s an even deadlier new enemy lurking in the depths – the mysterious undersea city of Talokan and their immortal ruler Namor, a blue-skinned, wing-footed Marvel favorite a la Hermes (I was disappointed not to see Derek Zoolander appear in an extravagant hairstyle and a whisper, “that’s triton“).

It’s definitely a fantastic spectacle where director Coogler deftly juggles the opulent Afro-futurism of Wakanda and the shimmering aquatic world of Talokan. The action is choreographed with style and attention to detail and the now usual climatic ding-dong is done in a half-hour bravado that sees a huge dreadnought slice thinking waves, lots of jetpack skydiving and a battle royale melee on a desert island.

There are strong performances from Wright, who struggles to balance his oceanic grief over his brother’s passing with his anger at the transgressors who now threaten his homeland. Tenoch Huerta Mejía is enigmatic as Namor and Winton Duke as gung-ho tribesman M’Baku devours the landscape and spits it out in a grand performance.

But it’s Angela Bassett who towers over everyone as Queen Ramonda with her grief, anger and determination bringing a degree of gravity and dignity to a show that’s long in brilliant beauty but short in narrative substance.

It sets up those inevitable sequels with an understated elegance not normally associated with the standard Marvel schlock. Made with great style and seriousness, this is a worthy tribute to the great Boseman and an MCU film with heart and soul.